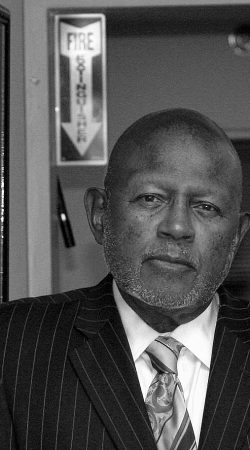 Michael LeNoir M.D. is an allergist and pediatrician who, has practiced pediatrics and clinical allergy full time since 1977. He is a graduate of James Madison High School in Dallas, Texas, a BA with honors from the University of Texas and an MD degree from the University of Texas in Galveston. He is board certified by, and a fellow of both the American Academy of Pediatrics and the American Academy of Allergy, Asthma and Immunology. He has served on the Board the American Association of Certified Allergist.  In 2014 Dr. Lenoir was elected the 114th President of the National Medical Association.

Dr. LeNoir is an associate clinical professor at UCSF andhas served as the chairperson of the Clinical Faculty. For 20 years he was the Director of Allergy Services at San Francisco General Hospital. He has a special interest in the asthma in the African American and high-risk communities and genetic polymorphisms. Dr. LeNoir served as the Chair of the Underserved Committee of the American Academy of Allergy, Asthma, and Immunology. He also served as the President of the Northern California Allergy Association. He has served as the chair of the National Medical Associations Allergy and Asthma and was awarded the Meritorious Service award from the National Medical Association in 2014.

At present Dr. LeNoir serves as the Chairperson of the Board of the African American Wellness Project. Founded in 2002 by health care leaders in the Bay Area, the objective of AAWP has long been to give African Americans the tools they need to deal in the health care system. Through the years AAWP has served as that voice through it regular radio feature, our podcast Black Doctors Speak. And AAWP is in all the social community spaces. Our history of success is featured on our home page www.aawellnessproject.org. Our audience through our latest partnership with Blackdoctor.org reaches 6,000,000 face book fans and AAWP has started a Facebook live channel and you tube channel.

Dr. Lenoir served as the President of the National Association of Physician Broadcasters. In 1994 and 2001, Dr. LeNoir received the Ken Alvord Distinguished Community Service Award from that organization. Hewas one of 50 physicians, nationwide, chosen to receive the Pfizer Positive Physician Award from the American Medical Association.  Additionally, in 1988, he was named the Oakland Citizen of the Year by the Oakland Tribune and named one of America’s leading African American Allergist by Black Enterprise Magazine in the August 2001 and 2008 issues. Since 2000, every year including 2019, Dr. Lenoir has been named as one of the 200 best physicians by San Francisco or by Oakland Magazine. He along with Dr. Frank Stagger founded the Ethnic Health Institute at Alta Bates Hospital and served as the President for over 20 years.

In 2006 he was awarded the Community Physician of the Year Award by the Residents at the Oakland Children’s Hospital and Research Institute, the Community Service Award from the Ethnic Health Institute, the Lydia Smiley Award from the California School Nurses Association.  In 2001, he was awarded the Public Service Award by Alameda County and was also honored for public service by the 100 Black Men.   He is also a recipient of the Burbidge Award for Community Service from the University of California at San Francisco. Dr. LeNoir spent 10 years in the United States Military rising to the rank of LTC, receiving the Army Commendation Medal and serving as the allergy consultant to the 6thArmy Area. In 2016 Dr. LeNoir was alumni of the year for the Black Alumni Association of the University of Texas at Austin in 2014.

From 1981 to 1993, Dr. LeNoir served as the medical editor for KCBS radio, hosting a 2-hour weekly talk show. Since 1985, he has been the CEO of the Ethnic Health America Network that produces the Telly award winning Ethnic Health America Program, a 30-minute TV health magazine at one time aired in 1400 cities nationwide on MBC Network.  Dr. LeNoir served as the host and executive producer of the About Health Program, a one-hour talk show on Pacifica Radio, KPFA. His popular one-minute feature About Health Time currently airs several times per week on KBLX radio inthe 9 bay area counties. He served as the executive producer of the video “Clinical Trials in the African American Community” which won top honors from among 1100 entries in the Health Video awards in 2005 and was a finalist in the Community Service Video category, International Health and Video Awards in 2006.

Dr. Lenoir is married to Denise Washington LeNoir. She has a master’s in nursing and is a family nurse practitioner.  He has 4 daughters and 5 grandchildren. He is a lifetime member of the NAACP, Alpha Phi Alpha Fraternity and holds memberships in Sigma Pi Phi Fraternity. His hobbies are photography and golf.